Still Crazy After All These Years: The Lewis Chessmen 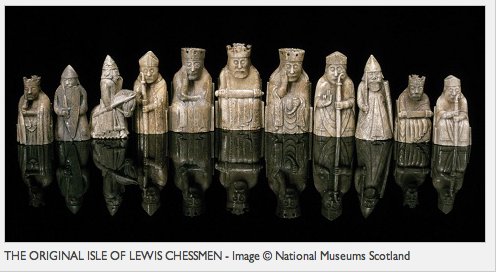 Life may have been tough in medieval times, what with rampant disease and warfare poised to snatch lives away at a moment's notice. But that certainly didn't stop people from enjoying life's small pleasures. The Lewis Chessmen, made in the 12th century, are a wonderful testament to the fact that size doesn't always matter. 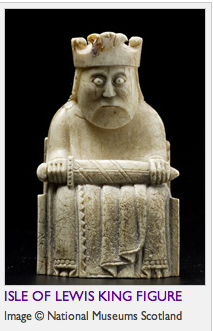 The Chessmen, found buried in a casket on the Isle of Lewis in the Outer Hebrides, Scotland, are thought to have been made in Norway (this article explains the various theories about their origins.)

The 93 pieces appear to belong to different sets and show little sign of use, so it's been suggested that they may have been in the possession of a  merchant, who possibly buried them for safekeeping but never had a chance to retrieve them. Chess was in vogue across Europe at this time, and these intricately carved pieces, made from walrus ivory and whales' teeth and originally painted red or white (the paint has long since faded), would have been a coveted status symbol for any aristocrat.

For the modern viewer, their appeal lies both in their amusing countenances and in the exquisite quality of the workmanship. Romanesque in style, the figures have the monumental quality of stone sculpture of this period, despite their diminutive size (the tallest is just under 4" in height.) The Medieval love of stylized pattern is particularly evident in the treatment of the Queen's long braids, and the animal-style decoration at the back of her throne. 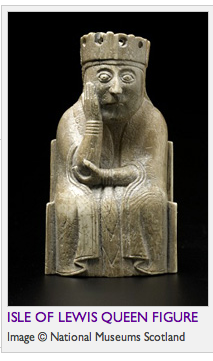 As to their funny expressions and bulging eyes, historians believe it unlikely that they meant to elicit chuckles. The Queen's expression, which we read as worried, bored or just plain exasperated, may represent sorrow over the tragedy of war. The King, who to us appears to have just received some really shocking news, is more likely contemplating his next move (how chess-like!) And the Bishop is not giving the peace-out sign - that's the traditional sign of blessing.

A particular favourite today is the Berserker, who corresponds to the rook or castle in modern chess. The Berserkers were legendary Norse warriors famed for charging into battle in a mad trance and fighting without concern for personal injury (drugs may have been involved.)

We laugh at the sight of this loony so crazy for battle that he's biting his shield in anticipation. But if we saw a real Berserker coming at us, it would doubtless be much less funny. Thank goodness we can visit the British Museum or National Museum of Scotland (the Chessmen are divided between these two institutions) and see this colourful cast of characters safely tucked away in their display cases.