It Came from New Brunswick! Fine Furniture by Thomas Nisbet


Owning finely crafted furniture was a sure sign of status in 19th century Canada. While today we would look to Toronto and Montreal for leading edge furniture design, in the early 1800s cabinetmakers on North America’s east coast had the advantage of both a thriving port-based economy, and direct access to imported mahogany, the Caribbean hardwood favoured for quality furniture (the cost of overland shipping rendered mahogany too expensive for most cabinetmakers in central Canada.)

Scottish born cabinetmaker Thomas Nisbet (1777–1850) settled in Saint John, New Brunswick, in 1812, and within several years had opened the firm that was to produce some of the most impressive pieces of furniture to come out of Canada.


Like fellow Scottish immigrant Duncan Phyfe, who provided New York’s wealthy with furniture in the latest fashions, Nisbet produced designs in the modish Regency and Empire styles. In form Nisbet’s mahogany sofa, above, is typical of the American Empire type, which emulated the ancient Greek kline or Roman lectus prototype. Yet Nisbet's is a cut above the competition. Look at the loving attention paid to carving the sea creature's scales, and the way its tail curves around itself at the end.


Like most cabinetmakers of the day, Nisbet worked in the furniture styles that were in vogue, using available patterns to which he added his own details. It’s in the latter that Nisbet’s artistry is most apparent. Fire screens, such as the one pictured above, were fairly common in prosperous 19th century homes, yet even this relatively humble object benefited from Nisbet’s finesse. As the Canadian Museum of History notes, “The finely turned bottom stretcher with rope carving is beautifully executed.” 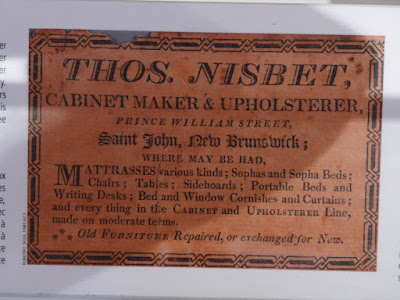 Not only meticulous as a craftsman, Nisbet had a savvy business sense as well. He was one of the few cabinetmakers of this period to label his pieces, an act that has made him much beloved of furniture historians.


Examples of Nisbet's furniture can be found in various Maritime collections (see the Dictionary of Canadian Biography link below for a list), as well as at the Royal Ontario Museum.

You can find out more about Thomas Nisbet here: