Rococo may have sprouted in France, but it blossomed in Germany. During the 18th century, France was the leader of style, and for rulers of present day Germany’s many states, decorating in the French style was a way to demonstrate their sophistication.

So accepted was the cultural domination of France that Frederick the Great, King of Prussia (1712-1786), could read French better than his native German. When it came time to add a new wing to Charlottenburg, the Berlin palace he’d inherited from his father, Frederick Wilhelm, Frederick the Great hired a team well versed in the style then called “le goût nouveau” or “the French taste.”


Supervising architect, Georg Wenzeslaus von Knobelsdorff (1699-1753), had studied in Paris on Frederick’s tab, while sculptor Johann August Nahl the Elder (1710-1781) had collaborated with noted French designer, Nicolas Pineau. The pair are credited with developing the form of Rococo known as Frederician.


While it features the requisite Rococo S and C curves, and of course cupids up the wazoo, what distinguishes the Frederician style is the plentiful references to gardens and nature. Frederick the Great was known for his interest in horticulture, and had his summer palace at Sanssouci designed so that he could walk straight out into the garden.


The first thing one notices in the famous Golden Gallery in the New Wing at Charlottenburg is the colour, an extraordinary delicate green that balances the copious amount of gilt stucco. Windows on both of the long sides illuminate the assortment of cherubs, birds, flowers and plants that spread out over the walls and ceiling in delightful asymmetrical fashion.


Charlottenburg was extensively damaged in WWII and when yours truly visited (June 2017) parts were closed due to on-going restoration work. But the Golden Gallery was what I most wanted to see, and I'm please to say it quite exceeded my expectations. Thanks Frederick, you made my trip! 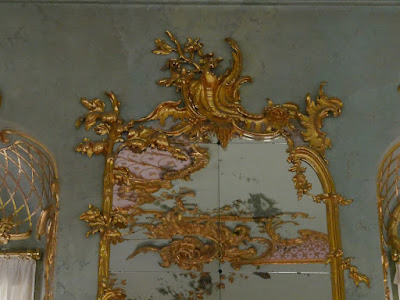 To find out more about Charlottenburg and the Golden Gallery click here.